He entreated the Lord at that time, saying, "O Lord God, You have begun to show Your servant Your greatness and Your strong hand, for who is [like] God in heaven or on earth who can do as Your deeds and Your might? (Devarim 3:23-24)

Rabbi Yossi opened and said, 'Hezekiah turned his face to the wall and prayed to the Lord. Come and see how strong the power of the Torah is and how superior it is to everything. Anyone who engages in Torah is not afraid of accusers above and below, and he is not afraid of bad cases in the world, because he is a fraction of the tree of life, which is the Torah and he eats from it every day through Torah study and prayer. That the Torah teaches man to walk in the way of truth, teaches him advice on how to repent before his Master. Even if death is condemned upon him, everything will be annulled and departed from him and not upon him. Therefore, one should engage in Torah day and night and not deviate from it. It is written: 'And you say it day and night' If he removes the Torah removes from him  or if he withdraws from it, it is as withdrawing from life '(Zohar Nigley Sham).

And although he rejoiced in his prayer, the Creator of the world stopped him and said: "It is enough for you; speak to Me no more regarding this matter. (Devarim 3:27)

For if Moses had continued, he would not have died. Moses in his prayers, atoned for the whole generation, and for himself and opened a way until the revelation of our Righteous Messiah, who now lives and exists in the Land of Israel. Every Jew who prays to the Creator of the world in supplications, their requests will be granted. You pray to the Holy One! That's the secret! You do not see or hear Him but pray and ask Him! The Creator of the world sees and hears you and gives you your requests.

There is nothing that is above the Holy One Blessed be He, He is above all and to which one should turn in requests. There is no need for 'hangers', of the kind of intermediaries, communicators, readers in coffee and cakes or tarot, approach Him directly. Most of all, the Creator of the world is happy that His children ask Him for requests.

Messiah our righteous son of David, came out of Lot and his daughters, Judah and Tamar, Ruth the Moabite. Many disturbances, ups and downs, because Messiah  came to make the impurity and filth of the serpent a pure thing. The power of impurity is constantly interfering, knowing that it is being wiped out of the world, because it is the  generation of Messiah, of the revelation of the last Messiah and there is no return!

Some Jews are still complacent and sleepy, unaware that Messiah is acting and working, they are thinking it is something ancient and imaginary.

If the government does not restraint and cancel these demonstrations, there will be an epidemic of demonstrations. It will be, God forbid, as in Arab countries and they will behave like animals. The vast majority of the protesters are Gentiles who receive money from Europe and from all sorts of places that are against the Jews. The violent and harsh demonstrations are a danger to the Land of Israel. It is the Holy One who determines what will be in this world. The king's heart is in the hand of God, no matter who he is. The choice in the hands of man and the intervention in his choice is the most hard one  for the Holy One Blessed be He, but there is no difficulty for the Holy One Blessed be He.

The government of Israel and the IDF, keep an eye on the North, the West Bank and the Gaza Strip. The Arabs are looking for their own interest, they do not care about the Holy Land, they only care about free hatred.

Trump is fighting for the presidency. If Trump does everything for the good of the people of Israel - he will get another presidency, if not - he will not.

Trump and Putin are against a third power, they want to rule the world.

Lebanon, there will be a difficult civil war with Hezbollah and Nasrallah.

Turkey on alert, Erdogan on the lookout for a revolt. Nothing will help him. In Turkey, people who demonstrate and disrupt disappear.

The situation in the world is the worst. Chaos across an abyss, gog and magog all over the world. The Creator of the world let the whole world mess with the corona virus so that they would not interfere, harass or harm the people of Israel, take parts of the Holy Land. Anyone who harms Israel harms himself. The Jews in Israel need to understand that the Corona virus abroad is for the benefit of Israel, so that they do not disturb us. If there was no virus in the world, the whole world would want to 'eat' Israel, all kinds of calamities could come from them.

We are on the King's Road! Corona has solved all the troubles of the people of Israel, of the Jews!

The forces of nature will continue to operate throughout the world, fire, water, earth, wind and storms, earthquakes. Chaos, Gog and Magog all over the world.

If the Jews in the Land of Israel listen to the committee responsible for the corona virus and obey the instructions, there will be no economic problem and the disease will weaken. The problems in the Israeli economy stem from a lack of trust in each other.

We are in the time of Messiah, there are severe disturbances. Heaven sent Messiah to act, in this generation at this time because of the disruptions, severe demonstrations in Israel, the corona virus and the dysfunction of the government, to save the people of Israel and the world. 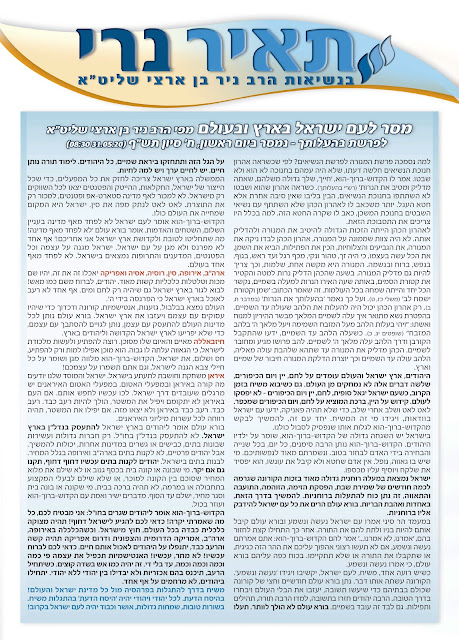